With humour and a subtle and daring use of colour, Al Qasimi takes us into the typical interiors of the middle class in his native country, the United Arab Emirates. Traditional decorative elements rub shoulders with modern utilitarian objects, familiar usage merges with social representation, and the aesthetics of the Persian Gulf mingle with those inherited from colonialism. To highlight this heterogeneity of tastes and values, the artist skilfully plays with stereotypes. The result, hybrid, saturated, both joyful and disturbing, reflects the rapid evolution of a young nation. The cultural, political and religious issue of women's visibility, and more generally of the representation of the body, is also at the centre of her photographs which, through their suggestive character and sophisticated framing, bypass the taboo of figuration by focusing on eroticised objects and bring women and their social interactions to the forefront of the spaces they inhabit. 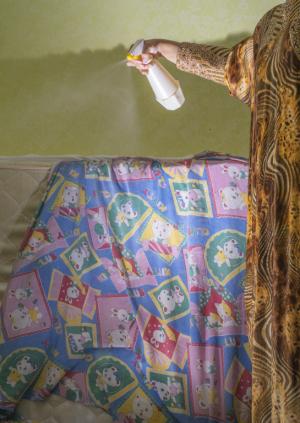